Before you jump too far into the theory that says Toyota hybrids are failing, keep a few things things in mind. Overall, Toyota brand car sales were down 42.4% in February 2011, Toyota sales overall were down 28%, and Lexus was down 7.2%.

Toyota/Lexus sold 551 hybrids in Canada in February 2010. This February, hybrid sales fell 37.2%. In what segments did Toyota Canada do well? RAV4 sales were up 6.6%. Sales of Highlanders which lack electric assist were up 33.3%. Sienna sales rose 238.3%. Lexus sold 153 IS sedans and convertibles (ISF sales totalled 3, down from 5 at this time last year) up from 131 in February 2010. Overall, the Lexus RX enjoyed its best February ever in Canada.

However, Prius sales have been cut in half in 2011 so far. Lexus sold only 1 GS450h in the first 59 days of 2011. Despite intended exclusivity, the wild ISF has sold four times more often than the GS450h “performance luxury sedan” that is supposed to appeal to both sides of the brain. For every Camry Hybrid sold in Canada in 2011, Volkswagen has sold more than 2 Passats, a vehicle line that’s forged along without a 2011 model year edition. 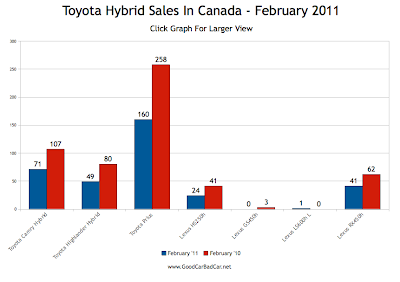